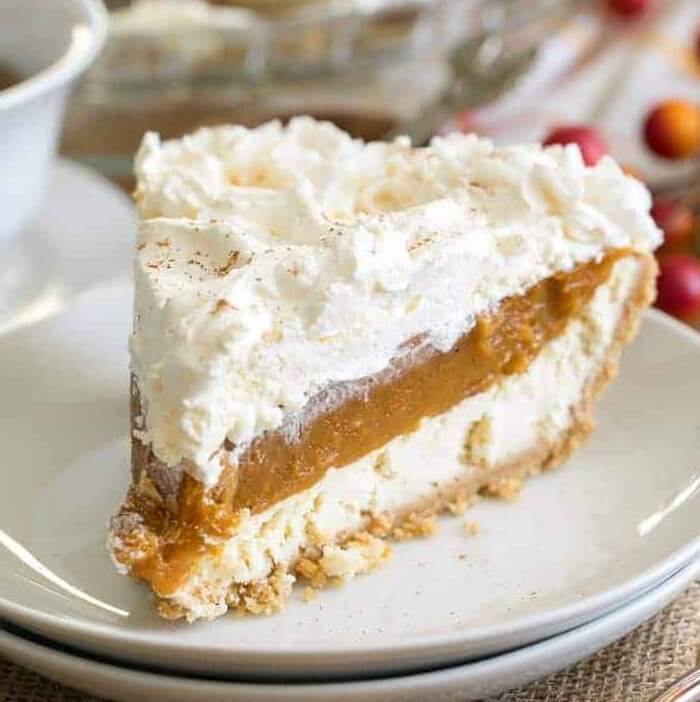 This no-bake pumpkin pie recipe is so delicious! If you love all things pumpkin then you must try this recipe!

Our No-Bake Pumpkin Pie is quick and easy and only takes 10-minutes to prep! Canned pumpkin, cream cheese, cinnamon, and other great fall flavors layered in a graham cracker crust!

No-bake recipes are really the best thing ever, especially for someone like me. I like to think of myself as more of an “assembler” than a baker.

I can put together a dessert like no one else! Especially when it involves a store-bought crust!

2 8-ounce containers of Cool Whip or other whipped cream

Set out your graham cracker crusts so they’re ready for the filling.

For the bottom layer, add cream cheese, sugar, and one 8-ounce tub of whipped cream in a separate bowl and blend well with a hand mixer. Fill your premade crusts with this layer evenly.

Next, mix pudding and milk and stir until thick. Add 2 cups of canned pumpkin. Add pumpkin pie spice, nutmeg, and cinnamon. Stir until blended. Put this on top of the cream cheese layer.

For the top layer, use the second 8-ounce container of Cool Whip to top the pies. I suggest sprinkling a little pumpkin spice on top. It looks lovely and is oh-so-delicious!

This recipe makes two pies one for me and one for everyone else! You’ll have extra whipped cream to either cover the top of each pie or use on something else.

You can also make one deep pie in a springform pan.